Master the Algorithm to Grow Your Audience

It’s a simple question that can make all the difference for video content creators: How does the YouTube algorithm work? Knowing the answer can make the difference between going viral and staying invisible.

Currently, YouTube’s recommendation algorithm drives 70% of all views on the platform. But despite its influence, the algorithm’s inner workings remain mysterious.

When you’re publishing videos, you may be struggling to find the viewership you’re looking for. There’s a good chance that the reason for this is that the algorithm doesn’t rank your content very highly.

However, learning more about the algorithm is also useful if you’re already enjoying some level of success. It can be a great way to take your channel to the next level.

Here, you’ll learn about some of the YouTube algorithm’s lesser-known secrets. We’ll discuss how you can use it to get your videos to the right viewers – and compete on the platform.

At its most basic, the algorithm is a loop of collecting data and recommending videos to users. It gathers data from viewers and channels to learn who will watch, like, and share which kinds of videos.

Ultimately, YouTube’s goal is to keep users on the platform for as long as possible. It does this by making it easy for people to find an endless supply of videos they will love.

The algorithm’s work appears in a handful of places across the site.

First, there is YouTube’s homepage, showing you rows and rows of video suggestions: 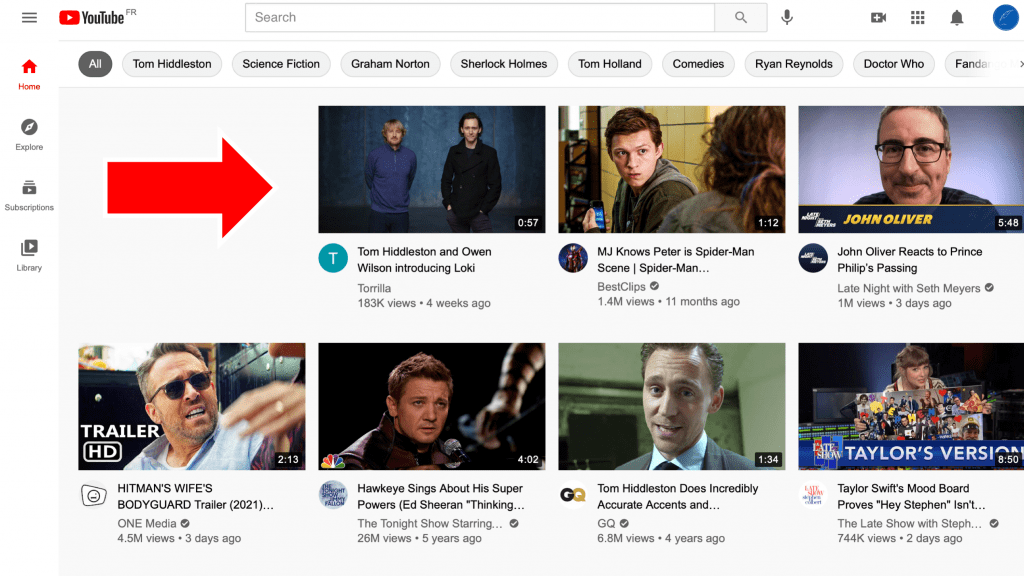 Second, the algorithm powers the site’s search function. If two different users search for the exact same phrase, the results will vary both in their content and ranking based on their individual history. 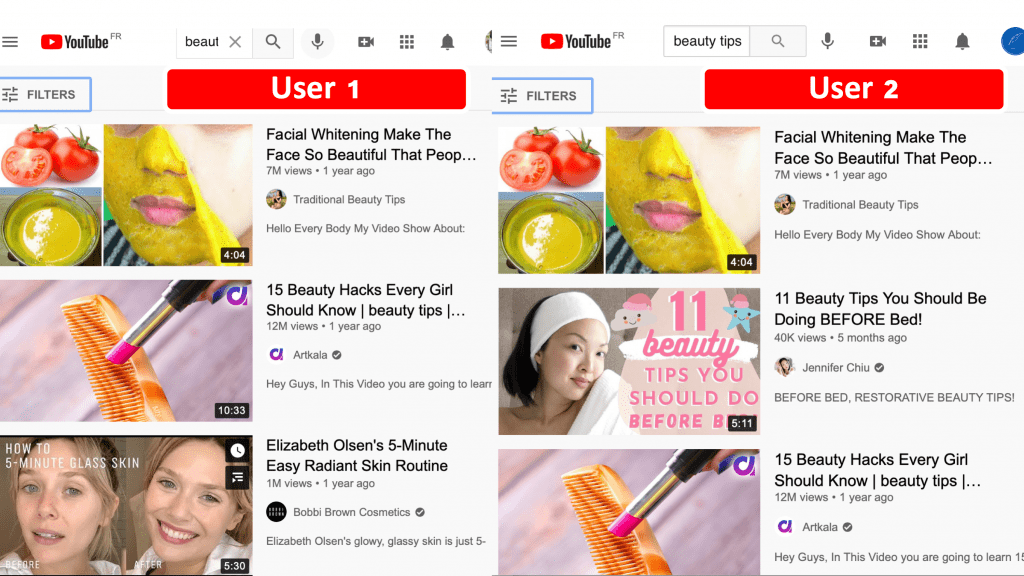 And finally, there’s the “Suggested Videos” field. It perpetually shows up in a column on the right margin of the page, video suggestions queued for autoplay at the end of every clip. The endgame? Keeping users from leaving the site. 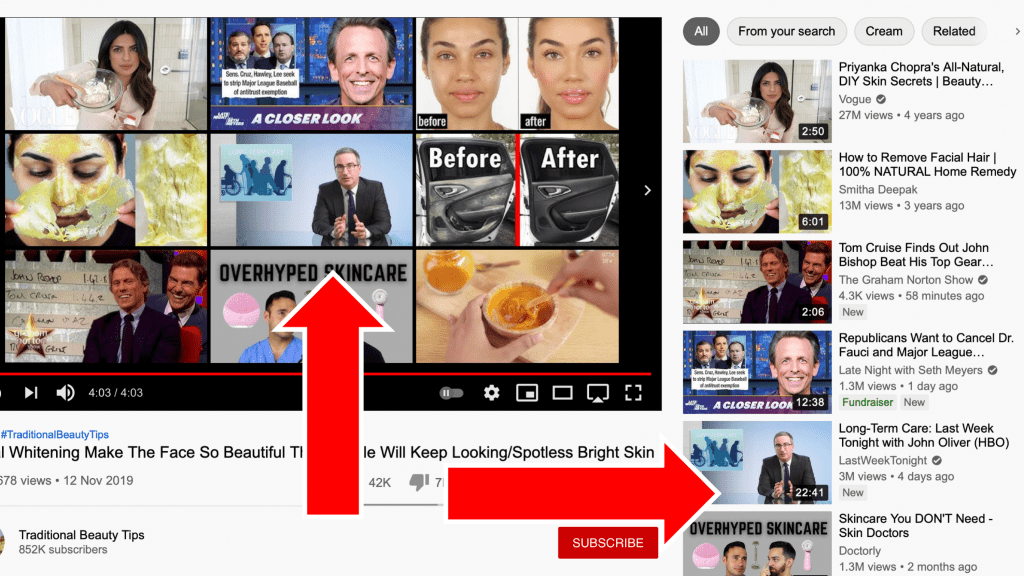 There are slight differences to how the algorithm works in each of these places. The underlying principles are the same, though. Let’s explore those principles.

YouTube funnels videos to users based on their feedback.

This feedback can either be explicit (likes, dislikes, subscriptions) or implicit (video watch time, shares).

On the basis of this data, the algorithm builds user profiles using deep learning and the power of the “Google brain”.

Then, it groups similar users to fill out the picture of what individual users may or may not like.

Subsequently, YouTube uses this profile to decide what suggestions to make. This is a two-step process: The algorithm first generates candidates, and then ranks them. 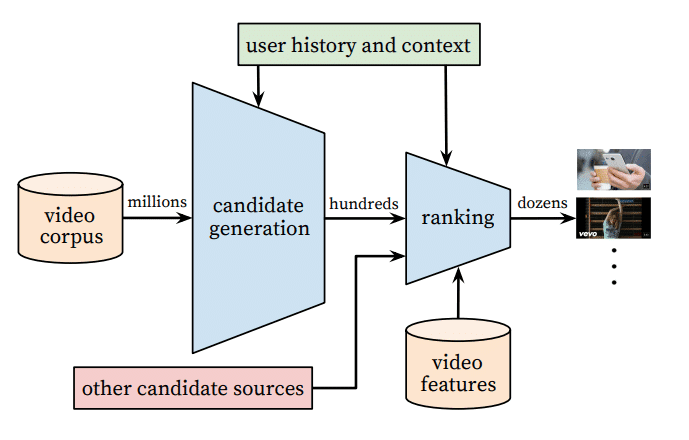 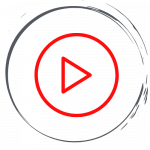 The process begins with the vast body of YouTube’s entire video library. The first step, candidate generation, selects just a few hundred out of billions of videos. The picks reflect the viewer’s implicit preferences and demographics.

But these implicit preferences are more than what the user has watched. It’s also how much they watched of each video.

This demonstrates an essential part of YouTube’s algorithm. A video watched to the end carries much more weight than those abandoned after seconds.

Another critical measure of implicit preference is which videos a user has shared.

The candidates generated in this step are all likely to be relevant for the viewer. Still, the pool is too big to suggest all of them. This leads to the second step: ranking.

The factors that go into ranking are similar to those of candidate generation. There are a few new ones, though implicit preferences still matter. The algorithm will now prefer videos with more views, likes, and comments.

Every video is assigned a score, and the algorithm ranks them all according to that score. But then comes one extra step. To ensure that the suggestions are as varied as each user’s interests, some randomness is introduced.

Most users watch videos on different topics at different times. Still, they will usually have one or two subjects they watch more than others. YouTube, reflecting this dynamic, won’t only suggest videos from the dominant subjects. Rather, it intentionally passes a diverse selection on to the viewer.

This introduced diversity works in two ways. First, it encourages watching a variety of subjects. Second, it also introduces videos from less popular channels. So, if a channel’s videos aren’t always top-ranking, they still have a chance to make it into the recommendations.

After a video passes through this second step, the algorithm will suggest it to the user – whether on their homepage or elsewhere on the page.

How Can You Harness this Algorithm to Generate Views?

It’s important to have a basic understanding of how the YouTube algorithm works in theory. Yet the more valuable lesson for creators is how to actually use it to find success on the platform.

Here are six critical steps to getting your videos in front of an ideal audience. 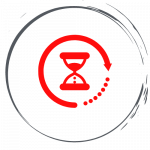 One of the most important lessons is that it’s important how much of each video your viewers watch. This means focusing on interesting, engaging content that your viewers will enjoy.

Don’t make videos longer than they need to be. Do everything you can to get your viewers to stick with you until the end.  Keep them entertained throughout. Drop hints about exciting tidbits of information that you reveal later on. You might include a fun outro in every video.

This requires some reflection on the quality of your videos and the responses that they’re getting. Do more of what works and less of what doesn’t! 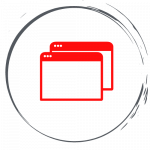 2. Get Viewers to Watch Multiple Videos

Viewers who have watched several videos from your channel are much more likely to see your videos in their suggestions.

The first step to earning multiple views is to put out a lot of engaging videos within your niche. There are also a few key tactics to encourage this type of engagement.

One easy strategy is to reference past videos on your channel. Simply say something like, “If you enjoyed this video, then you’ll love the one we published last week about Topic X.”

Include as many links as you can to your other content. Pin a comment with a link to your most popular video. Create a playlist of audience favorites. Include a closing screen with links and thumbnails of similar videos.

All this encourages viewers to check out more of your videos. That in turn makes it more likely that they – and similar users – see your content suggested. 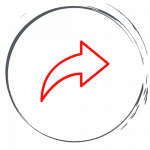 3. Focus on Shares, Not Just Subscribes

Getting subscribers is vital in building an audience, of course. But getting viewers to share your content is just as important.

Shares are part of the implicit feedback taken into consideration by the algorithm. Implicit feedback features in both candidate generation and ranking. Thus, it has a huge influence on which videos your audience sees on their homepage.

Beyond that, shares are an organic way to expand your viewership. On the one hand, you get the strengthened position of implicit recommendations. On the other,  links to your videos will spread all across the web! 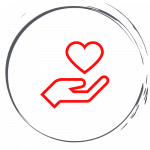 4. First, Gain Credibility Within Your Niche

New YouTubers often post videos about anything and everything that piques their interest. This is an integral part of finding a niche that works for you and connects you with your ideal audience.

But once you’ve determined your niche, it’s important to build credibility within that niche. Improving your reputation will drive viewers to more of your videos, giving you a higher ranking in implicit feedback.

Becoming a credible authority takes a lot of time and videos to achieve. Good planning and consistent publishing gives your channel the best chance at success.

One lesser-known way to increase organic reach is hitting several niches at once. True, it’s crucial to find one topic to focus on. But if you find overlapping subjects, they might pull in otherwise disinterested users.

You don’t need to apply this tactic to every single video. Still, try to include content that will interest various people for a variety of reasons. 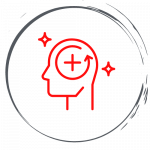 It’s true that YouTube has been accused of promoting hateful or dangerous content in the past. But recent changes to the algorithm have shown a shift in ranking. There is now more of a preference for videos likely to encourage good feelings in the viewer.

This advice applies to more than your video content itself, though. It also applies to titles and thumbnails. Avoid titles with clickbait, shock value, or controversy to generate interest. Don’t use ALL CAPS, and don’t make false claims to mislead potential viewers.

Your videos are most likely to get watched if they are genuine and connect with your target audience.

Keeping Up to Date: How the YouTube Algorithm Works Changes Constantly

There is one more thing for content creators to consider: The YouTube algorithm changes on an almost daily basis. In a typical year, engineers make hundreds of modifications to the algorithm.

However, as a creator, your job is to publish great videos, not keep up with the ever-changing algorithm. That’s where we come in. Not only does the team at Tasty Edits stay up-to-date on every change. We can also help make sure your content is ready to take advantage of those changes!

Whether you’re just getting started or looking to take your online presence to the next level, Tasty Edits can help.

For more tips on producing video content that viewers will love and that will earn you money, join our email list or reach out to us.

Ready to give professional video editing a shot?

Our goal is to help you save time and grow faster; let us handle the tedious job of editing while you do literally anything else!